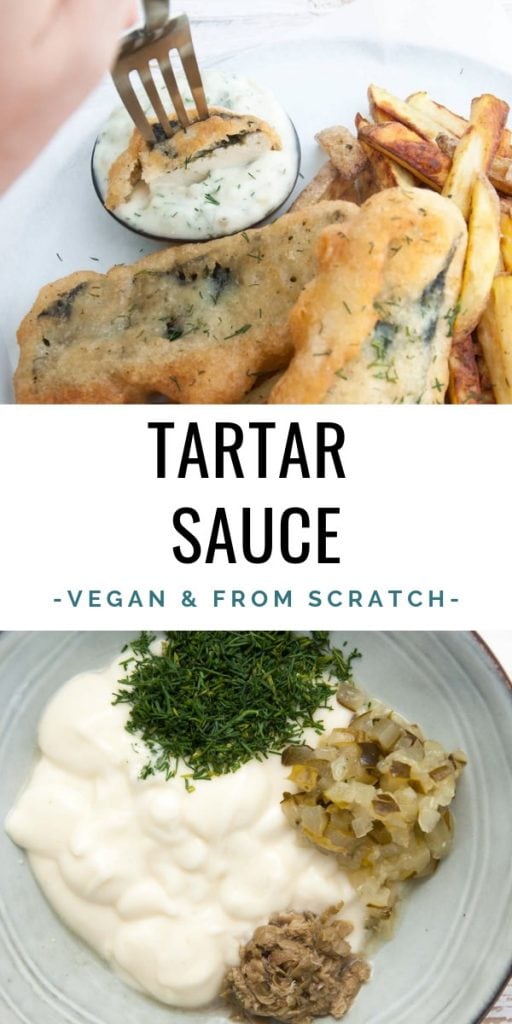 This is the perfect Vegan Tartar Sauce for all kinds of fishy foods. The sauce is made from scratch and we’re making our own vegan mayo as a base!

While most (vegan) Tartar Sauce recipes on the internet start with mayo, we’re making everything from scratch – even the mayo base. Don’t be afraid. It’s easier and faster than you would think.

The Ingredients for the vegan Tartar Sauce

To make the mayo base, you’ll need an immersion blender. If you don’t have one, you can use a food processor or blender instead but you’ll probably have to double or even triple the recipe to get it to work (depending on the container size of your preferred kitchen appliance).

Serve the Tartar Sauce with… 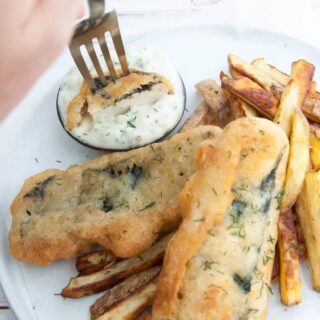 Elephantastic Vegan
This is the perfect Vegan Tartar Sauce for all kinds of fishy foods. The sauce is made from scratch and we’re making our own vegan mayo as a base!
4.58 from 7 votes
Print Recipe Pin Recipe
Prep Time 5 mins
Total Time 5 mins
Course Dip
Cuisine Vegan
Servings 4 people
Calories 172 kcal

*If you don’t want to make your own mayo, you can also use 5 tablespoons of store-bought vegan mayo. **Stick to the soy milk, I haven’t had any luck making the mayo base for the Tartar Sauce with rice milk or almond milk.

Calories: 172kcalCarbohydrates: 1gFat: 18gSaturated Fat: 1gSodium: 204mgPotassium: 9mgVitamin A: 15IUCalcium: 9mgIron: 0.1mg
Tried this recipe?Mention @elephantasticvegan or tag #elephantasticvegan!
Affiliate Disclosure: This post may contain affiliate links, which means I may earn referral fees if you make a purchase through my link. While clicking these links won't cost you any extra money, they will help me keep this site up and running!
4.5K shares
Click here to cancel reply.

Can't wait to try this at the weekend! What kind of mustard do you use? I'm from the UK and not sure if I should be using American Mustard, French Mustard (Dijon) or British Mustard? Or another kind...! Thanks!

my mustard of choice is dijon mustard :)

This sounds wonderful, I can’t wait to try it!

Is the dill fresh or dried?

What do you mean by relish?

I've used fresh dill. If you want to use dried I'd recommend using only 1/4 teaspoon or so. By relish, I meant finely chopped pickles. I'll update this in the post :)

Tartar sauce you make very delicious and attractive. I love this dish.