Homemade Seitan coated in breadcrumbs and pan-fried until golden and crispy. This is the perfect vegan alternative to traditional Schnitzel. Serve the Seitan Schnitzel with baked potatoes and lingonberry jam and you’ll be in foodie heaven! 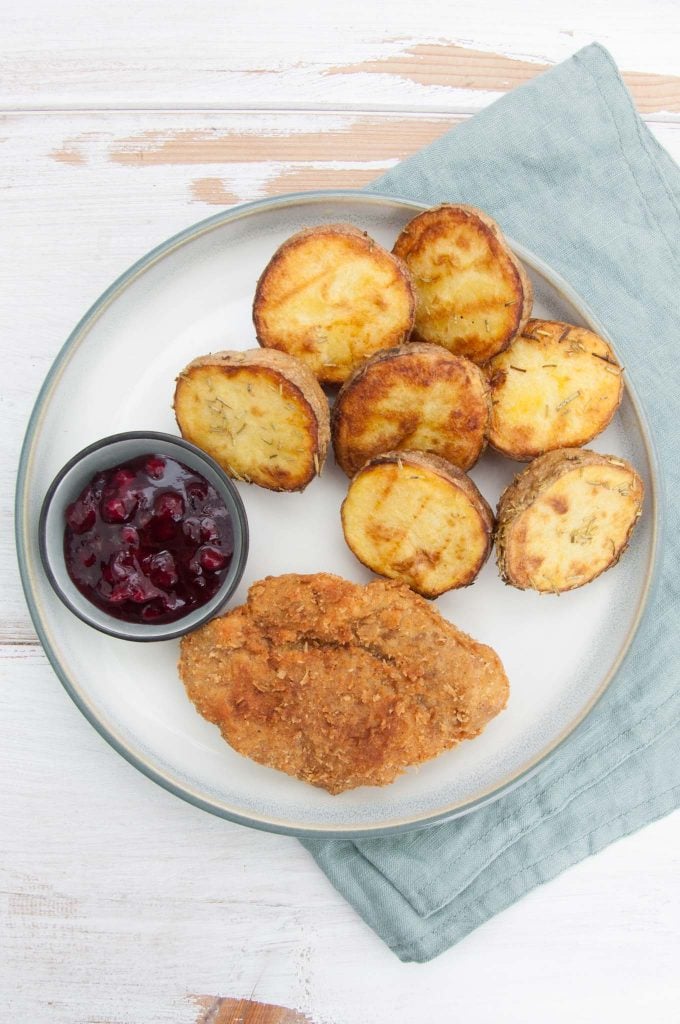 This vegan Schnitzel recipe is one of the most popular recipes on my blog but a few people have reported that they can’t find TVP slices (which I use for the base), that’s why I wanted to offer an alternative that is just as delicious: Seitan Schnitzel.

For this Seitan Schnitzel recipe, we’re making our own seitan steaks. But don’t worry. It’s much easier than it sounds.

The Ingredients for the Seitan

How to make Seitan Schnitzel 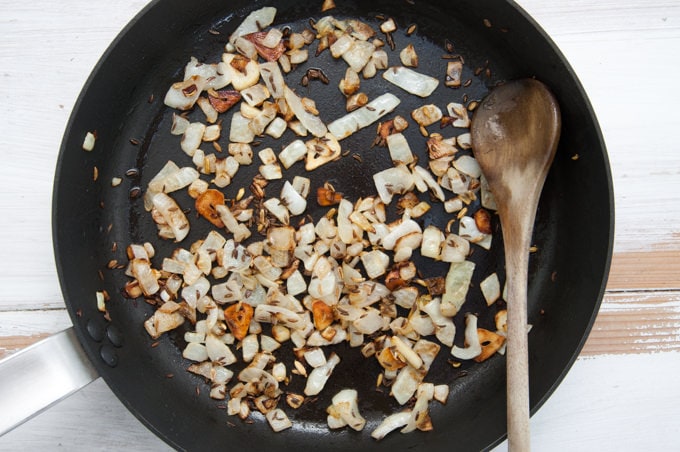 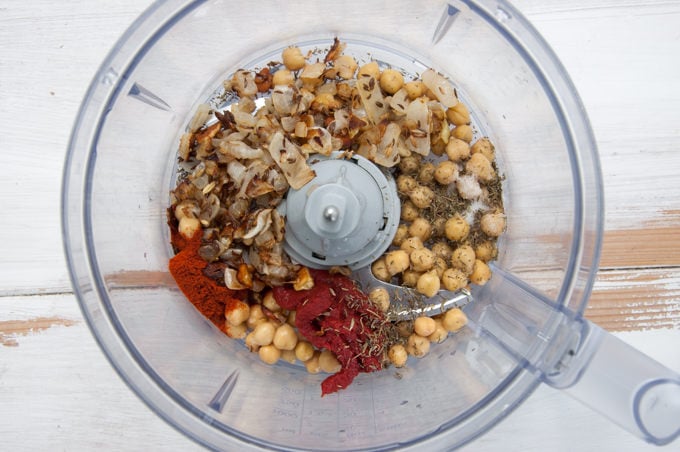 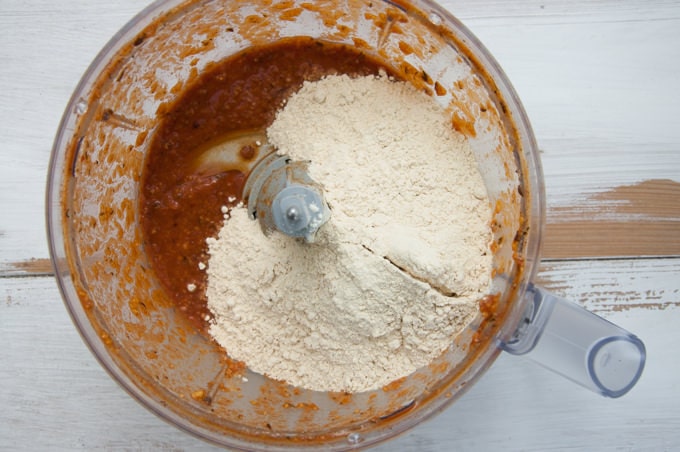 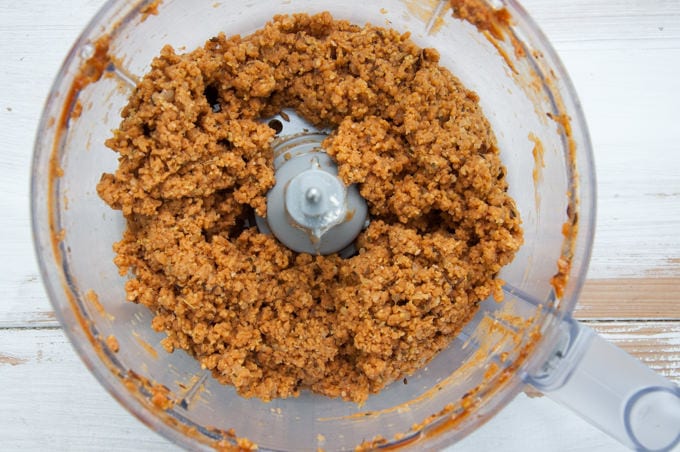 Step 4: The seitan should come together in the food processor. 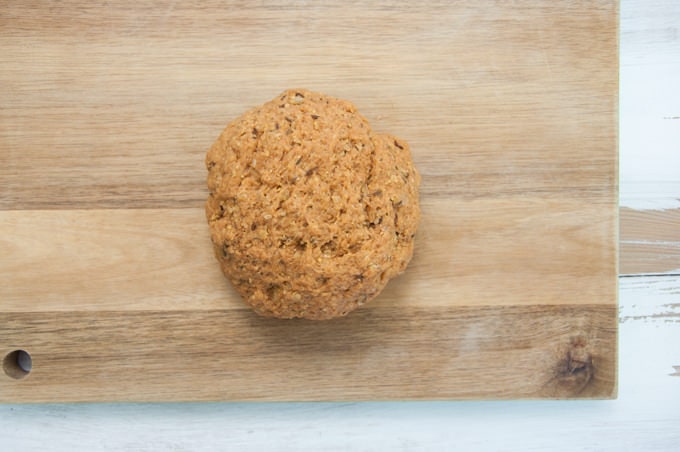 Step 5: Transfer the seitan onto a board and press it together until it’s a ball. 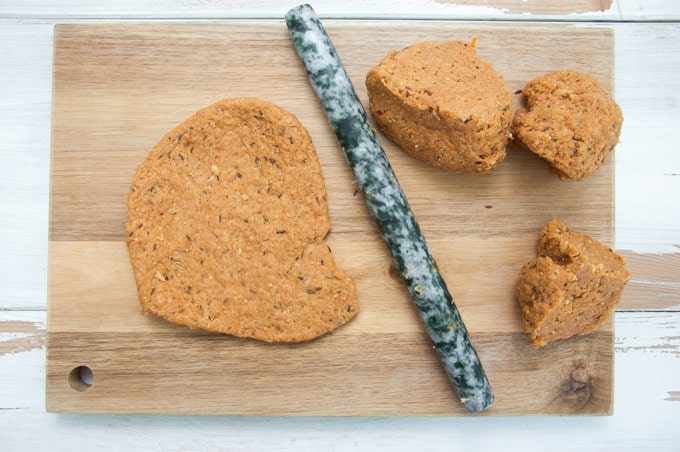 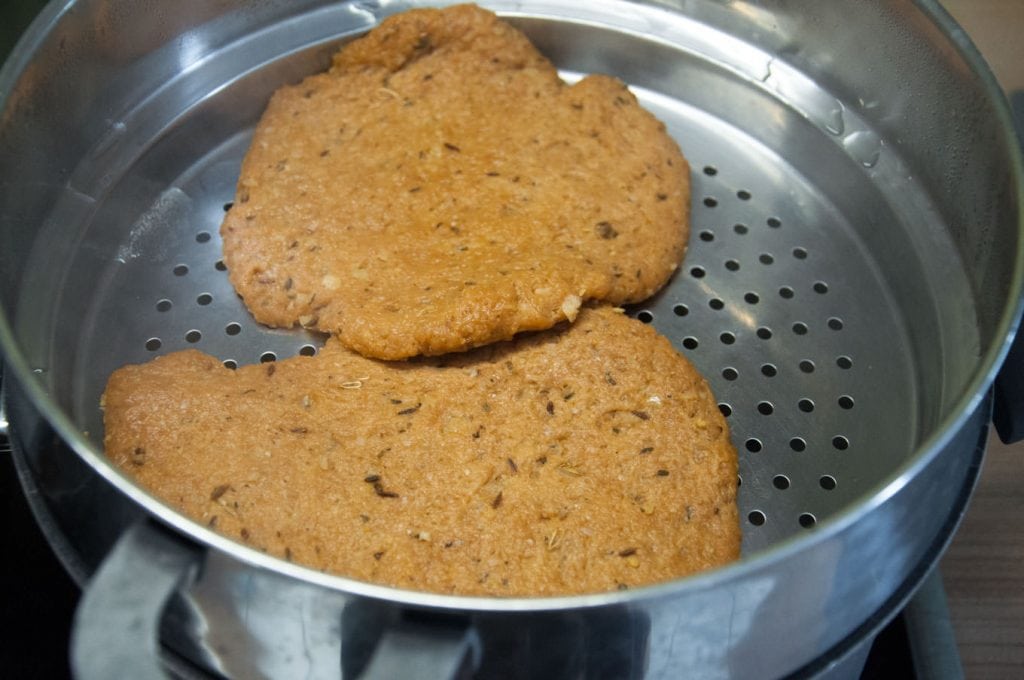 Step 7: Steam the seitan 10 minutes per side. 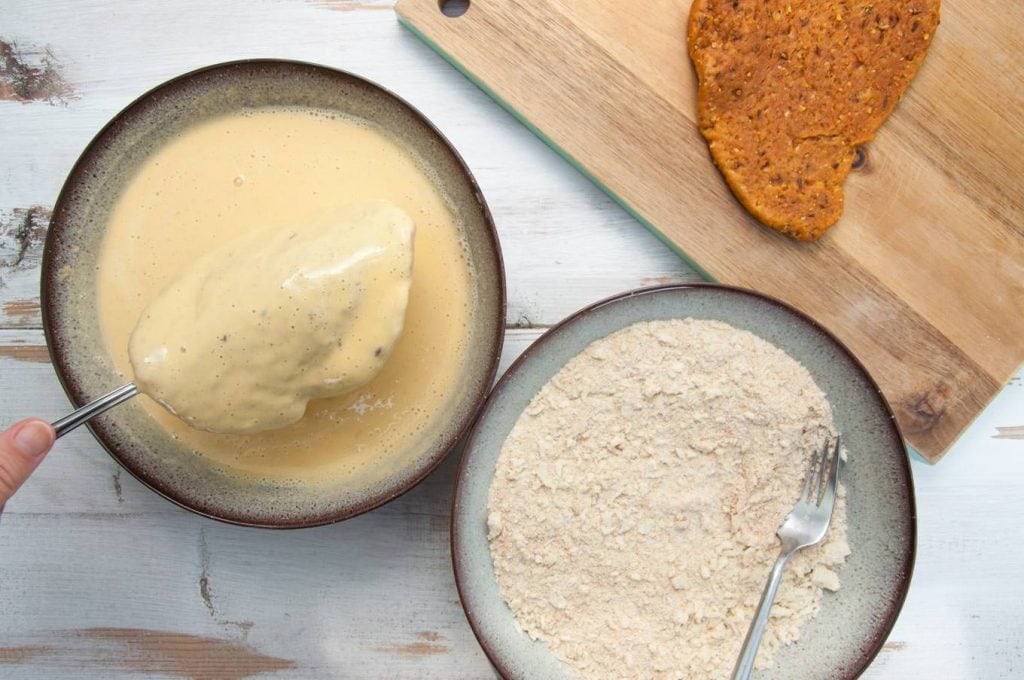 Step 8: Dip the steamed seitan steaks into the egg replacement made with chickpea flour, water, and sriracha first. 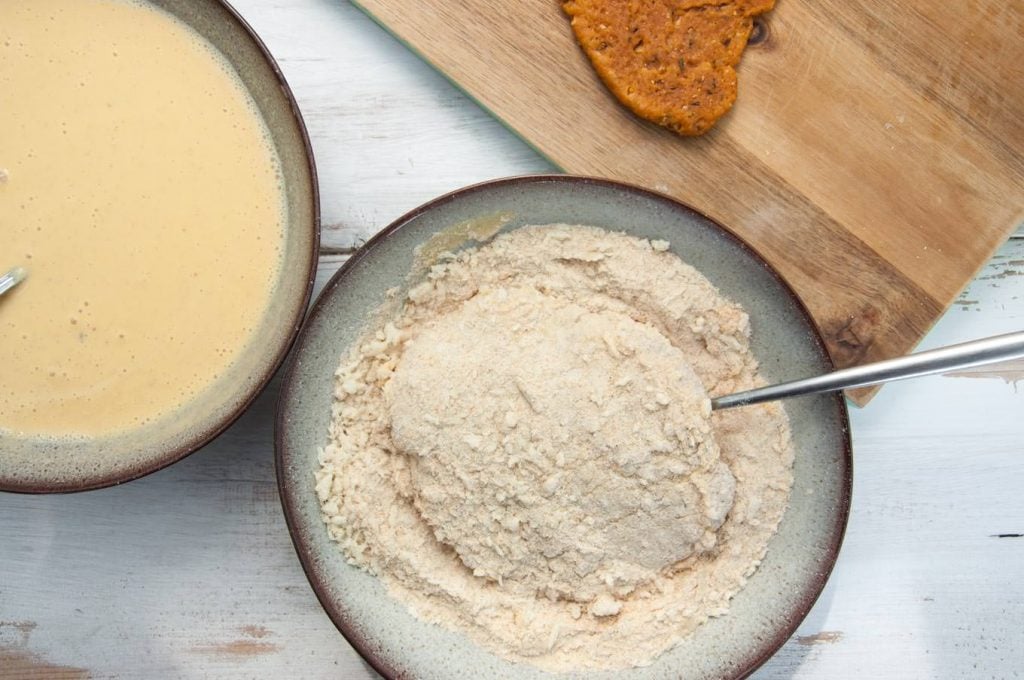 Step 9: Then coat the seitan steak in the breadcrumbs. Make sure it’s coated on all sides. 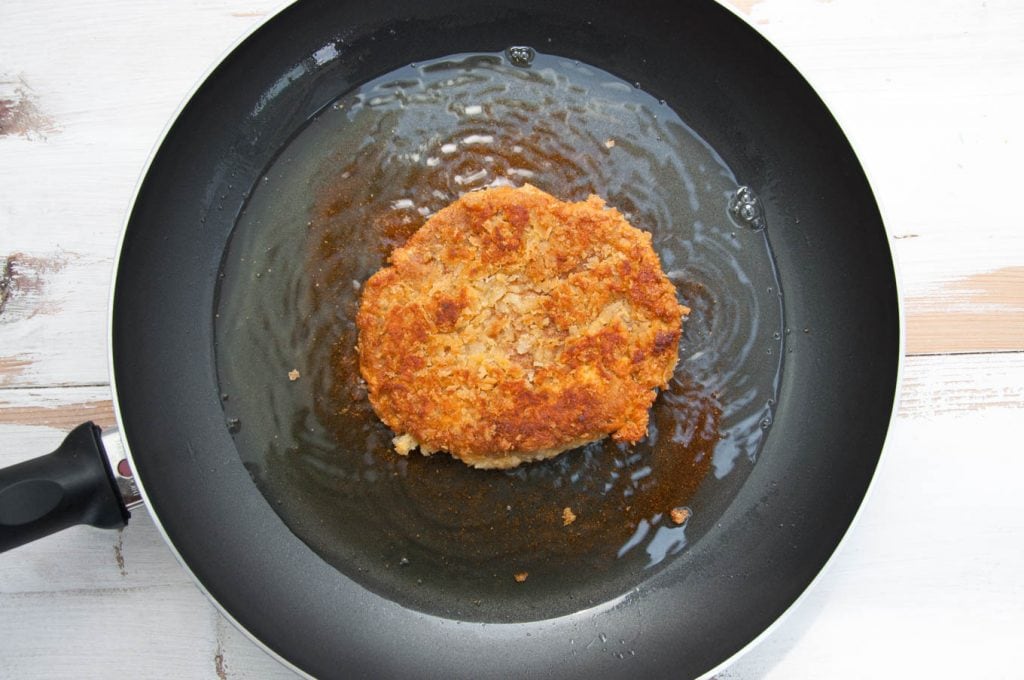 Step 10: Pan-fry the vegan Schnitzel until golden brown on both sides!

How to make Seitan that isn’t spongy/rubbery/tough?

My super secret ingredient for Seitan that doesn’t have the texture of a rubber mallet is Sparkling Water! It’s just a simple substitution with a huge effect. The seitan has an almost fluffy consistency! Keep in mind that the texture of seitan changes with time. Seitan will be a bit tougher and chewier if you eat it the next day. Breaded seitan will stay softer than ‘naked’ seitan.

Traditional Schnitzel is usually served with either potato (cooked potatoes coated in butter and sprinkled with salt and parsley OR french fries) or rice, and lingonberry jam (people hate it or love it – I love it!). The traditional side dishes are great for the Seitan Schnitzel as well. I also love to serve the Schnitzel with parboiled rice with lots of peas.

You could also cut the Seitan Schnitzel in strips and serve it over a salad or in a wrap. 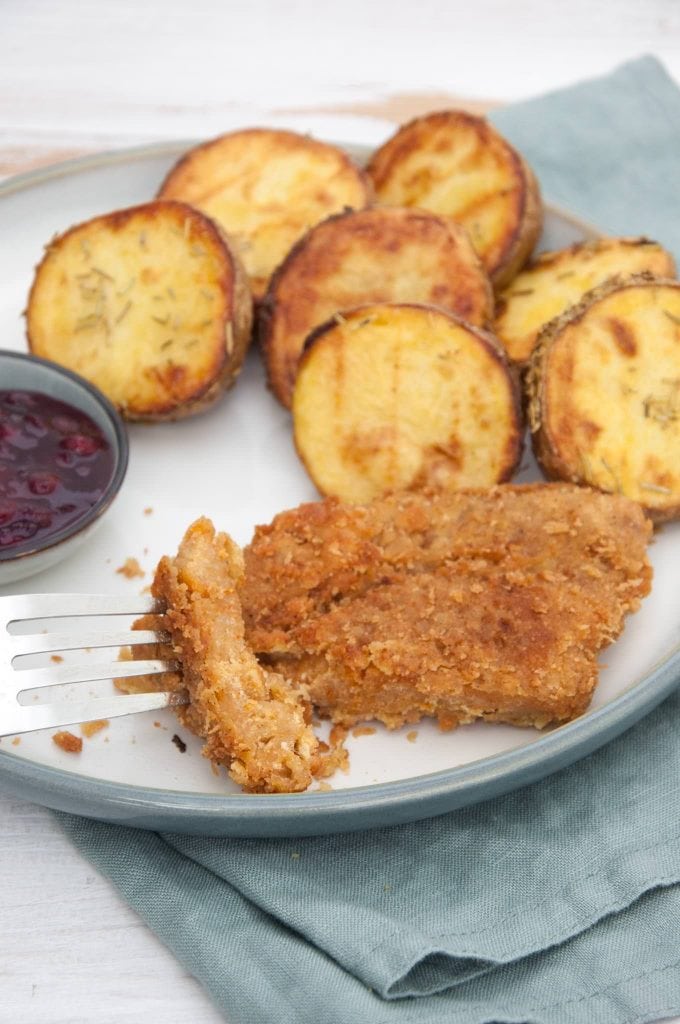 More Seitan Recipes you will love

I hope you’ll enjoy this homemade seitan schnitzel as much as I do!

Let me know if you give this recipe a try! I’d love to hear how it turns out for you. 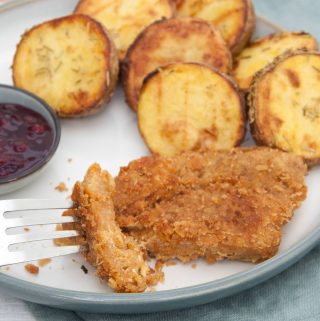 *Don't want to make your own seitan? Use store-bought seitan or check out my Vegan Schnitzel recipe using TVP slices.