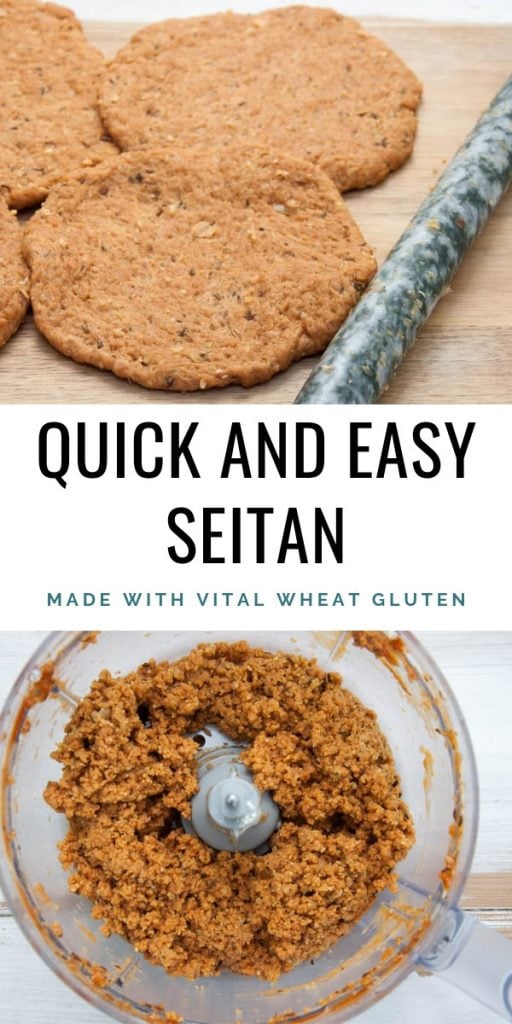 Seitan is a vegan meat alternative that you can use for steaks, sausages, schnitzel, stews, gyros and many more typical meat dishes. This seitan is quick and easy to make and is not as hard or rubbery like many store-bought seitan products are. You can make the seitan in a food processor (=almost no kneading at all!).

I love seitan but it took me exactly 4 years to master making it at home! Seitan always turned out too hard, too chewy, too rubbery. Does anyone else thinks that store-bought seitan is rubbery as hell?! So that wasn’t an option for me either.

I’m really proud of this seitan recipe. The seitan is soft and fluffy, while still having a nice meaty texture. Thanks to two tricks, this seitan is different from any seitan you’ve ever had (more about that below).

You can make seitan by washing out flour until all the starches have washed away. But this takes a lot of time. For this seitan, we’re using vital wheat gluten instead. This makes it so much faster!

Seitan is a vegan meat alternative. You can use seitan in any dish in which you want to substitute meat. Seitan is especially great for steaks, schnitzel, sausages, gyros, Philly cheesesteak sandwiches, pepperoni, curries, goulash or stews.

If you can’t eat gluten, you shouldn’t eat seitan because seitan is pure gluten. Other than that, seitan is a great source of protein, calcium, and minerals.

What is Vital Wheat Gluten?

Vital Wheat Gluten is made from the protein found in wheat. You can buy vital wheat gluten in powder form and it looks just like flour! It’s the key component for making seitan. It makes the seitan chewy, gives it a nice meaty texture and binds all the ingredients together. It’s pure magic. Except when you’re gluten intolerant. Then it’s not for you.

How to make Seitan

Now… what do you want to make?

Do you want to know how to make vegan Schnitzel or vegan sausages with this seitan base? Or you can grill the seitan filets in a grilling pan, add herb butter on top and enjoy as seitan steaks!

How to make Seitan that isn’t spongy/rubbery/tough?

My #1 super secret ingredient for this seitan that has just the right balance of soft and firm is sparkling water! It’s just a simple substitution with a huge effect. Trick #2 is to use canned chickpeas instead of chickpea flour. This makes the seitan soft (even the next day or the day after!).

Can you freeze Seitan?

Yes, I’ve tried it with this seitan recipe and it works great! Let the seitan cool off completely, place the seitan in a freezer-safe container or ziplock bag, freeze. When you’re ready to eat the frozen seitan, let it thaw at room temperature for a few hours, then grill/cook/roast/whatever you want to do with it! It’s good as new!

More Seitan Recipes you will love

I hope you’ll enjoy this homemade seitan as much as I do!

Let me know if you give this recipe a try! I’d love to hear how it turns out for you. 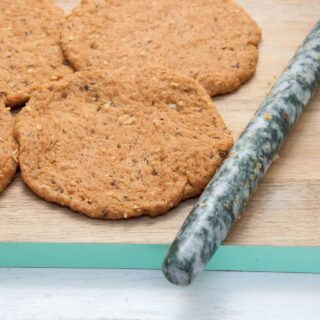 Seitan made with Vital Wheat Gluten

Elephantastic Vegan
Seitan is a vegan meat alternative that you can use for steaks, sausages, schnitzel or wherever you’d use meat. This seitan is quick and easy to make and is not as hard or rubbery like many store-bought seitan products are. You can make the seitan in a food processor (=almost no kneading at all!).
4.46 from 22 votes
Print Recipe Pin Recipe
Prep Time 15 mins
Cook Time 45 mins
Total Time 1 hr
Course Basics
Cuisine Vegan
Servings 4 large steaks or 8 vegan sausages
Calories 222 kcal

Affiliate Disclosure: This post may contain affiliate links, which means I may earn referral fees if you make a purchase through my link. While clicking these links won't cost you any extra money, they will help me keep this site up and running!
11.3K shares
Click here to cancel reply.

This turned out great! Living in Indiana, seitan is not always available. And when I do see it in the store it's kind of expensive. I followed your recipe exactly and the result was excellent--both in flavor and texture. I doubled it so I could try making both sausages and cutlets. My only question about steaming. I only have a small steamer insert for a medium sized sauce pan. This worked fine for the sausages as I could kind of stack the wrapped sausages inside. But with the cutlets, what is the best method? Do I need to get one of those steamer baskets that stack so the cutlets can be arranged in single layers? Should they be wrapped somehow? I tried to stack two of them and it was a bit messy. Other than that, I had no issues and the family loved them. I used it to make Isa's Autumn Seitan Sandwiches from "I Can Cook Vegan". Tonight we will have the Pantry Mole Bowls from the same. Can't wait!

So glad you liked it! For steaming the cutlets, I would recommend steamer baskets or you can work in batches and steam them one after another.

I should have commented a year ago on this . I use the chickpea and never looked back on kneading! My ratio is different. I use my own spices but always. 1 cup Of liquids to half cup of chick peas and one cup of gluten.... I double or triple recipe as needed! But I do not knead Ever! The food processor takes care of that for me! People always say how do you make all that Seitan? That too much kneading. I just smile and say I don’t! They always look at me in awe. Check my IG out! Vegan_heat!

Thank you for this recipe! I've tried to make Seitan before and failed miserably but I followed your recipe and made the most wonderful sausages! I printed it out and will be using it often! Thank you so much! <3

Hello! Just wanted to let you know that I really like your method of steaming the Seitan. I don’t know if that technique is specific to your recipe but I guess I’ll find out as I try different recipes on how to make Seitan. I started eating plant-based me in January of this year and just recently started making my own “wheat meat” . So far my family likes pretty much everything I’ve made. And with your method of steaming the wheat meat I feel a little more confident in what I’m doing so thank you very much. Also if you’re interested I had a “craving” for Café Rio’s sweet pork Barbacoa which has pork in it. And so since we are now eating plant-based protein I decided to concoct my own recipe and using your method of cooking the seitan and the sweet pork Barbacoa style sauce I sautéed strips of this seitan in a little sauce so it caramelized a little bit bell peppers , onions and made a burrito and inside the burrito was lime cilantro brown rice, black beans, pico de gallo and avocado my family ate it up so fast it made my head spin! I’ll be making that recipe again for sure😉

Kneading isn’t necessary??? Does pulsing in food processor take place of the kneading?