This recipe for a Vegan Eggplant Parmesan Sandwich consisting of breaded eggplant slices, marinara sauce, cashew parmesan and chopped basil in a homemade sandwich bun is the ideal summer lunch! 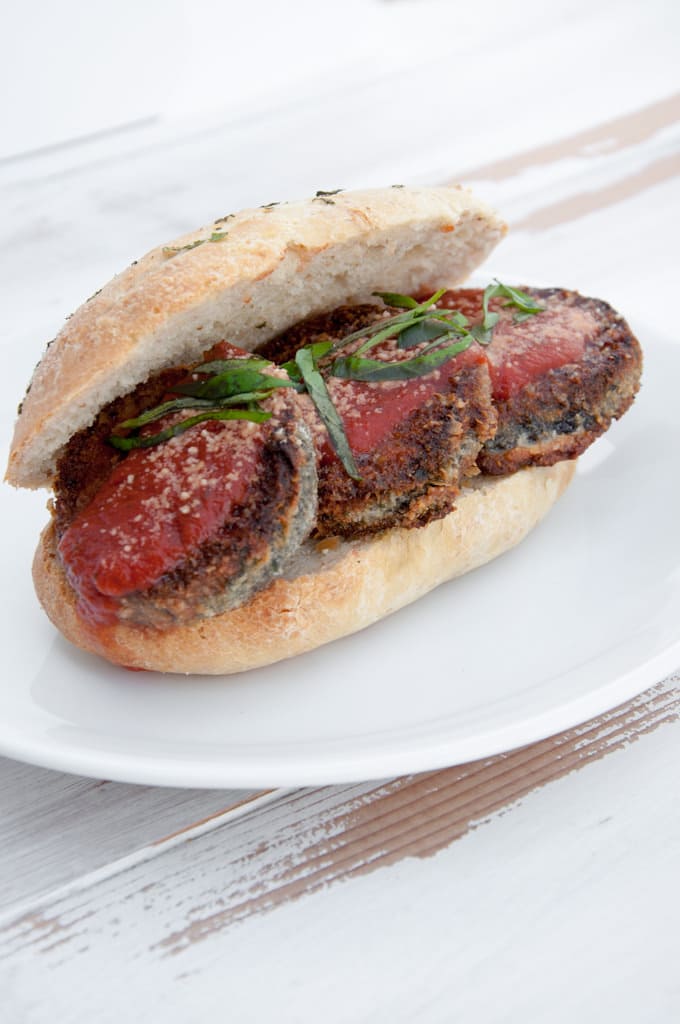 Initially I wanted to make this recipe for the Veginners Cookbook, on which I have been working on the last couple of months (just in case you’ve wondered what I’ve been up to). The concept of the cookbook is to provide simple, basic recipes that every new (and not so new) vegan NEEDS in his/her life. And while this Vegan Eggplant Parmesan Sandwich turned out AMAZING – it’s not cookbook material because it takes too long to be considered “simple and basic”. So lucky you, here’s a new recipe for you!

The eggplant slices breaded in breadcrumbs and lots of nutritional yeast are the heart of the recipe. The marinara sauce adds a fresh, creamy touch to it. The Cashew Parmesan adds even more cheesiness to the party. The fresh basil supports the whole mediterranean flair that combines the eggplant slices with the sandwich buns, which are homemade, brushed with olive oil and sprinkled with even more basil. Yumm! 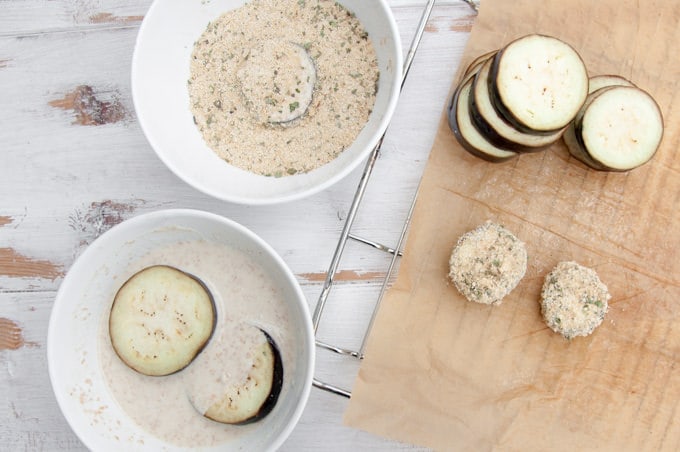 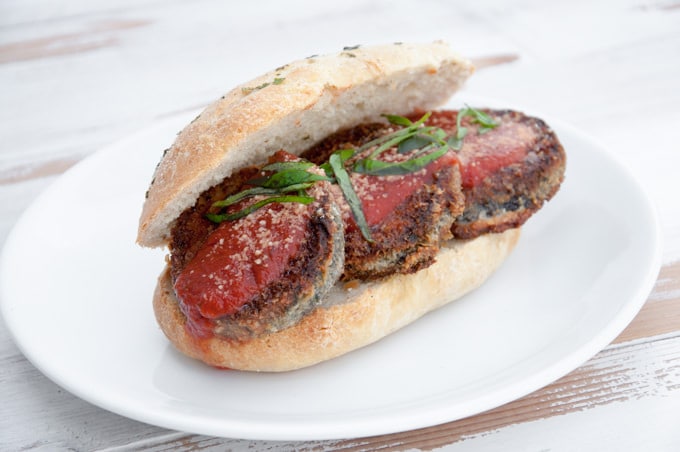 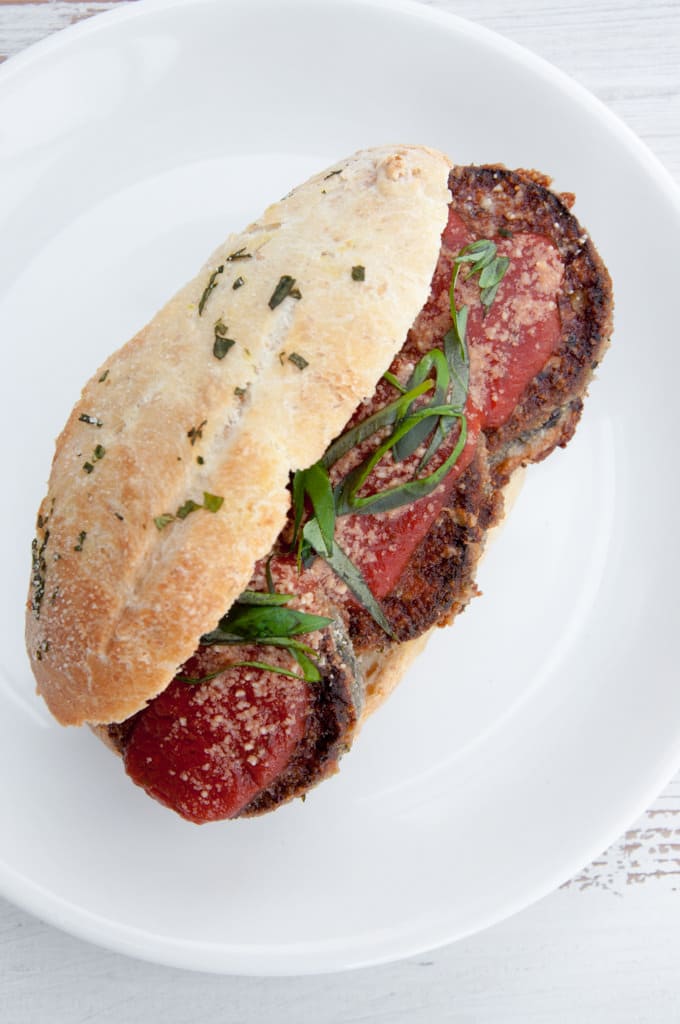 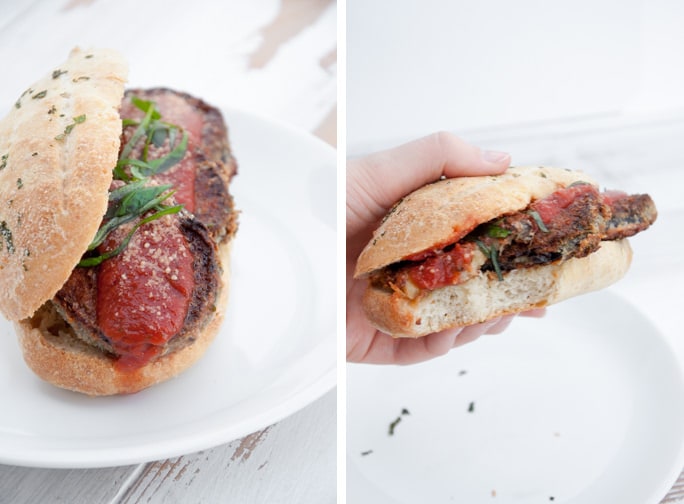 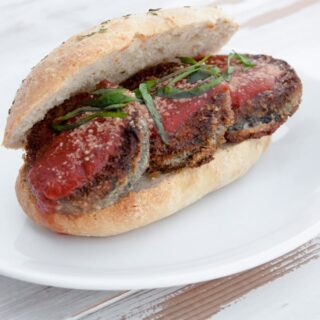 Ingredients for the breaded eggplant

Ingredients for the marinara sauce

Ingredients for the sandwich buns

Additional ingredients for the sandwich

Instructions for the bread

Instructions for the Eggplant Parmesan

Instructions for the marinara sauce

Affiliate Disclosure: This post may contain affiliate links, which means I may earn referral fees if you make a purchase through my link. While clicking these links won't cost you any extra money, they will help me keep this site up and running!
1.8K shares
Click here to cancel reply.

i'm gonna try this one this week , i'm the only one that loves eggplants at home , and i've got two huge organic ones , sound like heaven , it's mouthwatering and here it's 17 h 30 long time before diner :'(

This sounds amazing! I want to take a HUGE bite! I've been eating a ton of breaded eggplant recently...usually over zoodles with marinara...but I'm loving the sandwich idea too! Gotta try this!

Oh, that sounds really good too, Jenn! I've got to try that :)

Eggplant parmesan was one of the first real "meals" I made when I went vegan...and made over and over because I wasn't too good at cooking vegan back then lol. But it is still one of my faves. Not the fastest you are right, especially not when you make the bread yourself and turn the whole thing into an epic sandwich, but so worth it😋 Loving the fresh basil addition too!

Ohh that's really cool to have eggplant parmesan among the first vegan meals! My first vegan meals were pasta and pureed spinach or pasta and tomato sauce, hahaha so creative, right?! Oh and not to forget about Olives for Dinner's coconut cheese. :) I basically lived on this stuff.

That sounds pretty perfect to me!! Eggplant parm sounds like one amazing meal!

Thank you, Rebecca. It was really delicious! It got that whole mediterranean vibe that will be great for the summer :)