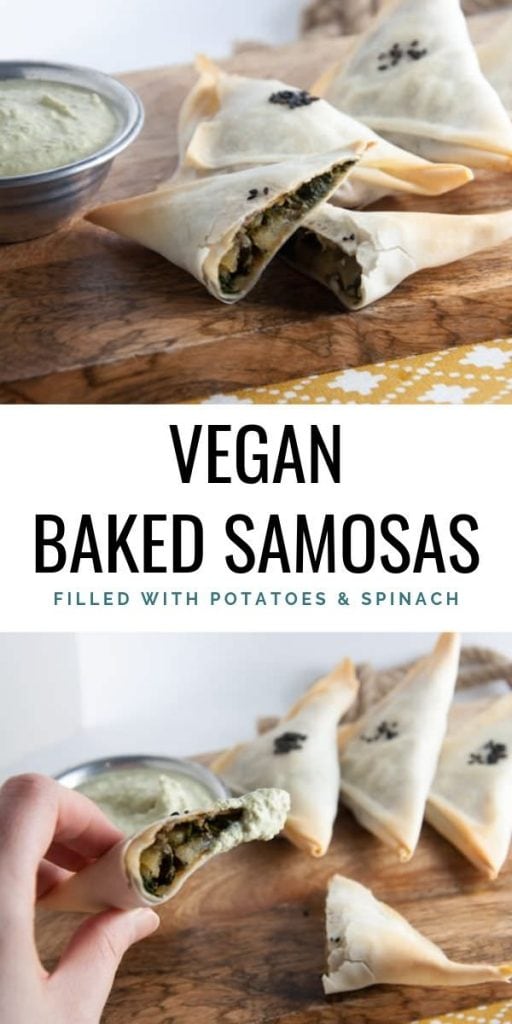 Recipe for vegan, baked Samosas filled with potatoes and spinach. They are a served with a creamy Cilantro Lemon Dip. So good! I’ve also included a video below on how to fold them! :) 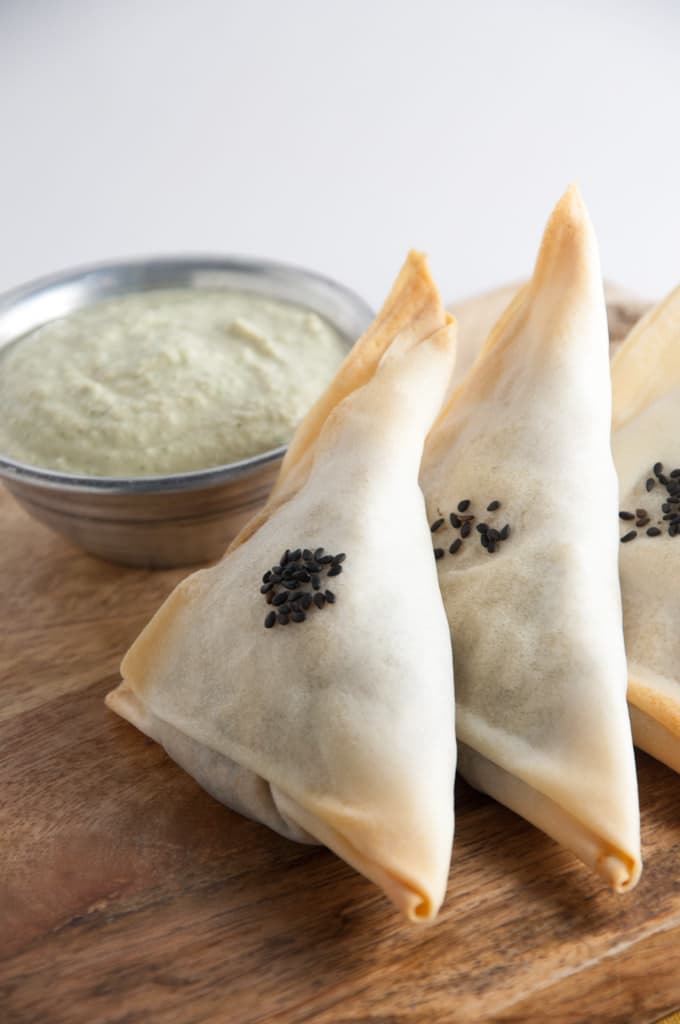 Samosas are little pastries with a savoury filling. They are typically fried, but I’m not a big fan of frying at home, so I opted for a baked version.

Samosas are usually served as an appetizer or snack, which makes them perfect to serve at parties as well. Looking for more crowd-pleasing party ideas? You definitely want to check out this post > 12 Vegan Drinks & Eats for your next Party <

There are also different forms and folding techniques, so you don’t have to necessarily stick to the one I’ve used, but if you want to, I’ve included a little video of how I folded them below.

The black sesame seeds are completely optional, but if you want to make samosas with different fillings, you can mark them with black and/or white sesame seeds or sunflower seeds, so you’ll know which ones are which. I filled my baked samosas with potatoes and spinach – a classic combo.

I made a little video to show how the samosas were folded. It’s kind of difficult to explain with words, so seeing it will hopefully clear things up.

I’ve served them with this vegan Cilantro Lemon Sunflower Seed Dip and the combination was exceptional. I can only recommend making that dip as well! 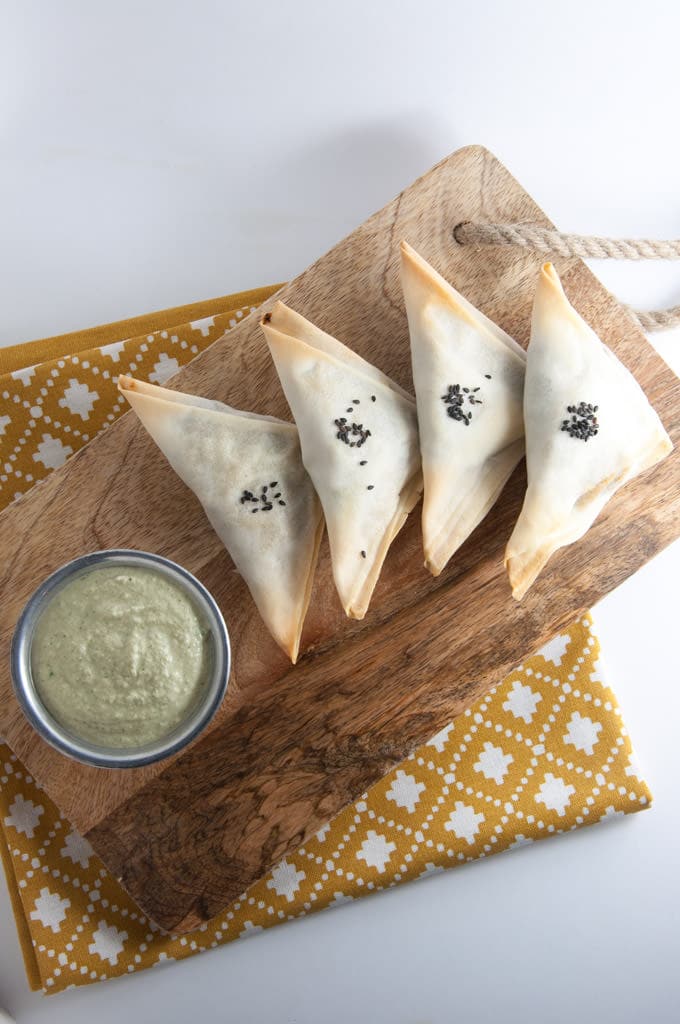 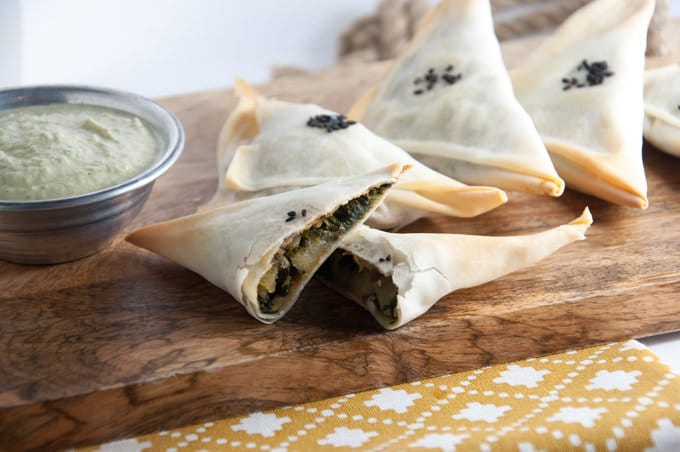 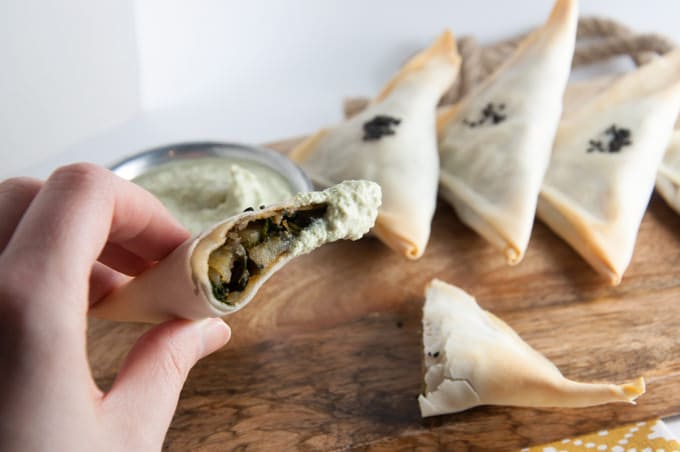 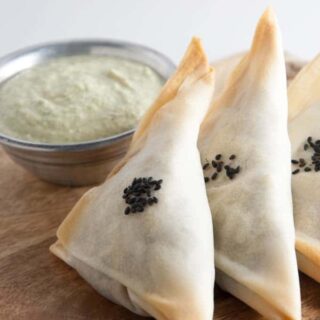 Ingredients for the filling:

*Make sure they're vegan. I've used frozen Spring Roll Wrappers and kept them in a damp towel when thawing to prevent them from getting too dry.
**If you make samosas with different fillings, you can mark them with black and white sesame seeds.

Calories: 79kcalCarbohydrates: 15gProtein: 2gCholesterol: 1mgSodium: 178mgPotassium: 167mgFiber: 1gVitamin A: 235IUVitamin C: 5mgCalcium: 23mgIron: 1.7mg
Tried this recipe?Mention @elephantasticvegan or tag #elephantasticvegan!
Affiliate Disclosure: This post may contain affiliate links, which means I may earn referral fees if you make a purchase through my link. While clicking these links won't cost you any extra money, they will help me keep this site up and running!
36.8K shares
Click here to cancel reply.

My son is vegan and I'd love to make these for him when he visits next week end. Do you also have a recipe for the cilantro dip you mentioned or another suggestion, since I'm a carnivore (!) ?

Hi Kendra! Here's the link for the Cilantro Sunflower Seed Dip: https://www.elephantasticvegan.com/vegan-cilantro-lemon-sunflower-seed-dip/. The dip is so perfect for the samosas, hope you both like them!! :)

Do you think you could freeze them?! Also.. Are they good reheated? Thanks!

I haven't tried it, but I think that would be fine! :)

Should be close enough! :)

The first spring roll wrappers I had in my hands were vegan, so I figured they all were. Too bad they're not.

I bought the brand "Spring Home" and had their TYJ Spring Roll Pastry (here's how they look: http://amzn.to/2dkOn6T ) They have different kinds and sizes. The ingredients should be: Wheat Flour (48%), Water, Coconut Oil, Salt. I got mine in an Asia Market, but if you can't find them at all, you could also make them yourself by following for example this recipe by recipesofindia.com. Best of luck! :)

I just made this recipe using phyllo pastry since i couldn't find spring roll wrappers. I must say they dont look as pretty as yours yet they are delicious! Cant wait to make them again using the proper wrappers!! Thanks for posting this great and easy recipe!

Glad to hear you liked them! Phyllo pastry is more flaky, right? I've found the spring roll wrappers in an Asia market in the freezer section. :)