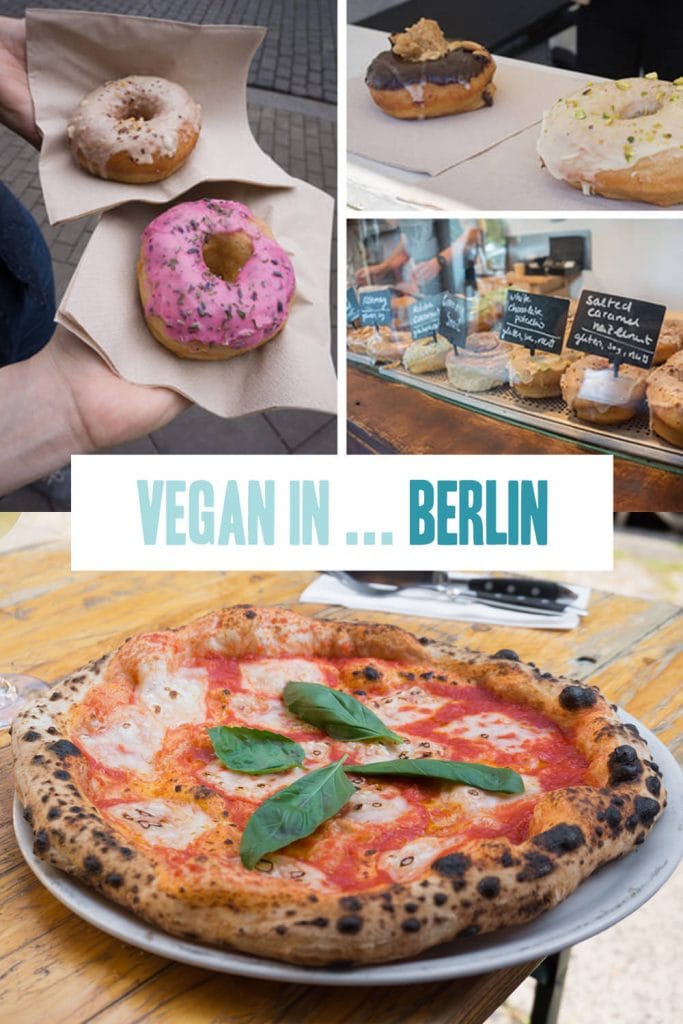 Berlin is hands-down a vegan’s paradise. In this post, I’m sharing my favorite places to eat vegan in the capital of Germany. Let’s get started!

Vegan in … is a series of posts on Elephantastic Vegan where I write about my vegan travelling experiences. I love to travel especially to larger cities, rather than spending my days on the beach at some resort, but finding restaurants with vegan options in a foreign city isn’t always that easy. With this post, I want to show you awesome places to eat for your next trip to Berlin in Germany! :)

It’s never a bad idea to use HappyCow to get a neat overview of your vegan eating possibilities. I haven’t even had the chance to try all of the vegan and vegan-friendly restaurants in Berlin because the city has so much to offer for vegans! So naturally, this post only contains the few options that I’ve tested and tried.

Instead of the regular sight-seeing section in my ‘vegan in’ posts, I’ll share a video of the food at the vegan summer festival Berlin! If you have a chance to go there, I can absolutely recommend it. The Vegan Summer Fest is usually in August, so make sure you check it out if you are in Berlin at that time! The food was amazing, the festival was perfectly organized, the people are so nice.. all in all.. it was perfect :)

…and now to the restaurants in Berlin.

BEAUTIFUL place, delicious bagels! (I had one with cream cheese, capers, dill and carrot lox, which was so good!), and super friendly staff. One of my favorite breakfast places in Berlin.

If you know me, I’m always on a secret mission of finding vegan croissants in any city. And Yummy Mummy Bistro made me very happy because they had not one, but two kinds of vegan croissants! So if you’re looking for soft, flaky croissants, this is the place to be!

Brammibal’s Donuts was probably what I was most looking forward to during our Berlin trip and I wasn’t disappointed. These were the best donuts (vegan or not) I’ve ever had. We had the Lavender Blueberry Donut, White Chocolate Pistachio, Chocolate Peanut Butter Fudge Donut, Strawberry Cream Cheese Donut and the Maple Coconut Bacon one. Can you tell we went there a couple of times? Brammibal’s Donuts is a must-visit when you’re in Berlin!

1990 Vegan Living offers Vietnamese tapas bowls, a few regular-sized portions, and awesome alcohol and non-alcoholic drinks. They have about 20 different tapas you can choose from, so there’s plenty to try out. Everything was perfect: The food, the atmosphere, the drinks, the friendly staff.

The food was actually so good, we went there 3 times during our first 5-day trip! We couldn’t get enough and we’ve tried our way almost all the way through the tapas bowls menu. Since then, every time I’m in Berlin, 1990 Vegan Living is my go-to happy place!

Just another pizza place – or not. At Stella Nera, everything is 100% vegan, they are a collective, working without a boss, and the food is absolutely amazing. We had chickpea fritters as an appetizer, a pizza margherita with vegan cheese and a pizza topped with salami. The pizza crust is the best ever. ever. ever!

Sunshine Vegan Restaurant was one of the places we stumbled upon by accident. And we didn’t regret it one bit(e). There were so many dishes on the menu, we never tried before, so we took this as our chance to try taro cake (on top), mock chicken drumsticks (middle), and breaded lotus root (bottom). The portions were so much bigger than we expected for the price! And it was absolutely delicious. Usually, I’m not a big fan of salad, but the salad underneath was AMAZING.

Okay, we might have gone a bit overboard at Momos because we ordered a large set (18 pieces) of pan-fried momos plus all of the sides: green beans, salad, and edamame. But we couldn’t resist! We opted for 3 different fillings for the momos: broccoli-shiitake-tofu, pumpkin-chickpea, and mushroom-potato. The broccoli-shiitake-tofu filling was my favorite! But they were all delicious and we were so full afterward. Momos is not entirely vegan, but 4 of the 6 different fillings were vegan ones, so lots of options!

I don’t think you can come to Berlin and not have a Vöner ;) Vöner is the plant-based alternative to Döner – meat on a rotisserie. I’m more of a wrap girl, while my travel companion chose the vöner in bread (with peanut sauce! yummy!). We also had the special fries with a cheesy sauce and caramelized onions, which was absolutely delicious. The portions are huge! I couldn’t even finish my wrap but it was a great breakfast the next day :D

We stumbled upon this small bistro and I’m so glad we did. We ordered the Pulled Beef Burger, fries with guacamole and Chicken Shawarma. Everything was absolutely delicious and it’s pretty inexpensive too. I loved the atmosphere in the restaurant – it’s small but there’s nice music, modern interior, and the staff is super friendly. You can also buy packaged meat alternatives.

Cat Tuong is a lovely small Vietnamese restaurant and 100% vegan. As for the appetizer, we had these fried dumplings/rolls of which I have forgotten the name, but they were really good. As the main course, I had the Pho Cary consisting of red curry with coconut milk, tofu, seitan, veggies, and rice noodles. The portion was huge and delicious! I’m a sucker for red curries :D The tables in the restaurant are really tight next to each other, so it was a bit awkward. But when I took the photos of the food, the person sitting next to us asked me if I’m a food blogger, so we talked and actually realized that he was Eric, the founder of HappyCow! Ahhh what a crazy coincidence. We talked a lot and got drinks afterwards.

Djimalaya is an Israeli restaurant – they serve meat but the vegan options are marked in the menu, so they’re easy to spot. We indulged in a mixture of their sharers: hummus, a plate of olives and pickled gherkins, sweet potato fries, homemade pita, and falafel. It was to die for and everything we’ve wanted in that situation. Yumm!

Streetfood Market at Mauerpark (on Sundays)

I can highly recommend checking out the Mauerpark flea market on Sundays. Not only can you find lots of vintage items and enjoy live performances, but there’s also a street food market and they have LOTS of vegan options. Actually so many, that we didn’t even manage to try them all.

So this was pretty much my Berlin Trip. Have you ever been there? Do you have any additional vegan-friendly restaurant tips for Berlin? I’d love to know in the comments!

This post was first published in September 2016. Last updated in August 2019. I’ve removed restaurants that closed permanently and added new ones!

Your blog post is so helpful, it's so great to know how many vegan options there are in Berlin. Thank you!

Thanks for this info. We took on the task of working through your list of fine Berlin eateries. We had some fantastic food, so thank you. Unfortunately though chaos Theorie went out of business and fast rabbit has closed, due to the owner leaving Berlin. We cycled to these locations and were sad to see that they no longer existed. I don't know whether you can amend this info, so no one else has a dsappointing end?

Hi Sean & Law, thank you so much for the update! I have to say, it was quite a shock to me when you said chaos theorie went out of business, because I LOVE that place. I just checked their facebook page and they said that they are on holidays until mid of august, so they should open up any day now again. I truly hope they do. It's one of my favorite places in Berlin. Of course, if I'll hear otherwise, I'll update the post.

As for the Fast Rabbit restaurant, I'm really sad to hear this, but it seems to be true that they really closed. I've updated the blogpost.

I hope you had a fantastic time in Berlin :) Cheers, Bianca

Oh my, I cannot tell you how hungry this post made me! I was in Berlin visiting friends in 2014 and was thrilled with all the vegan options. Unfortunately I don't remember the names of the places I went to, but there was an amazing pizza place with a vegan pear and gorgonzola pizza, as well as a different vegan Doener option (which I could have eaten ten of). Also the vegan cheese and dairy products in Germany are way better than here! Thank you for sharing this post, I am bookmarking it for the next time I'm there!

Heya Marlene, I just came back from Berlin yesterday and I found enough vegan restaurants for a Vegan in Berlin part II :D Maybe you went to Sfizy Veg for the pear and gorgonzola pizza? I heard the have awesome pizzas, but we didn't eat there. I almost collapsed when I went to veganz - the 100% vegan supermarket. SOOO many vegan products <3 Glad you like the post! :)

In my opinion Berlin is the worst place to be food-wise as a vegan - because there are just TOO many choices! One of my favourites is Dolores Burritos [serves meat, too, but has amazing vegan options], The Bowl is great but expensive and one restaurant I really want to try is Sfizy Veg. An all-vegan pizzeria that has a menu broader and more varied than most regular/non-vegan ones! I hope you had an overall fantastic time in Berlin - it has so much to offer, not just regarding food :).

Yessss, I'm glad I don't live there, because I'd have no money and I'd seriously gain weight :D Thank you so much for the recommendations!! Prior to my trip, I looked into all of the 3 restaurants you mentioned. I couldn't find any prices of the bowl online, so I ranked it back at my list of restaurants I HAD to visit. I really wanted to go to Dolores Burritos and Sfizy Veg but there was simply too much food hahaha. It was definitely not the last time I was in Berlin, looking forward to a part II :)